We’ve been the beneficiaries of a couple potato harvests planted by others. The first was in Portugal and the second here at Coppertop. The red potatoes we enjoyed from our farm near Lisbon were large, waxy, and delicious. The fingerling potatoes I harvested here last year kept us supplied with tasty roasting potatoes for many months. Just recently I reached into the dark recesses of my pantry to retrieve the remaining shriveled fingerlings with their pale tentacles and added them to our compost. We’d had quite enough of those fingerlings, or I would’ve made an effort to re-plant them. This year we’re going for some other spud varieties:  Yukon Gold and Red Pontiac. It’s important to start with certified, disease-free seed potatoes from a trusted source. Mine are from Sunny Farms Country Store in Sequim, and my total investment for a small amount was about $3.00. I’m considering this year a trial run. The first step was to cut the seed potatoes into pieces a couple days before planting, making sure each golf-ball sized piece had at least two buds or eyes. These pieces dried out in our garden shed, a process that’s supposed to  help reduce the risk of rotting. 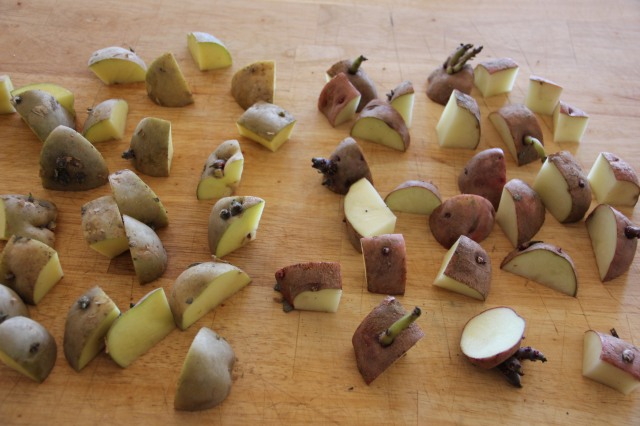 Because potatoes are one of the easiest, least demanding crops to grow, I decided to make use of a cultivated area rich with compost in a flat section of the veggie garden. Potatoes adapt well to acidic soils, and I’m hoping that helps compensate for choosing not to grow them in  one of our raised beds. Hubby helped by making furrows in the loose soil about 4″ deep, then I dropped potato chunks in.

After covering the chunks with 2″ of soil, I watered them.  As they sprout, I’ll add more soil continually, not fully covering their stems, but making loose hills of soil. This process is supposed to make the harvesting easier. Eventually these hills and furrows will be reversed. 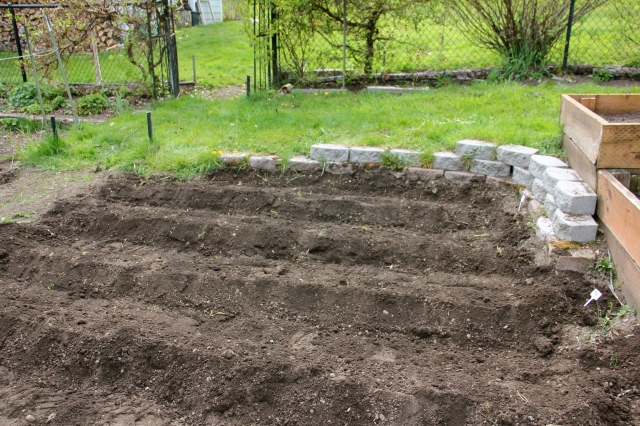 Alternatively, I’ve read that one can add more soil around and over the vines as the sprouts grow, keeping all except the last two sets of leaves covered until at least 2 feet of vines are covered by soil. New roots and baby potatoes will then develop along the buried stems and leaves. The same day I planted spuds, I added White Ebenezer onions to my onion bed. Nothing quite like roasted potatoes with onions!

3 thoughts on “Spuds Are In”