From my father’s side of the family, I am ⅛ German, or what used to be called Pennsylvania Dutch.  My hubby is also roughly ⅛ German, from his mother’s side of the family. We’ve passed along the tradition of my family’s New Year’s Day German meal of sausages and sauerkraut to our own kids, with the understanding that the feast must always be eaten at a beach. This never struck us as strange — tying the German roots to beaches — since Germany is so well-known for its beaches? 😉

The back story is that my family has always spent New Year’s Day on one of a few Northern California beaches, and I began inviting my high school sweetheart who many years later became my husband, and that’s what we’ve continued.  We’re just 16 years old in the background of this photo taken at a Pt. Reyes beach shelter on New Year’s Day 1978. Vast amounts of sausage, sauerkraut, and Martinelli’s are being consumed by all. 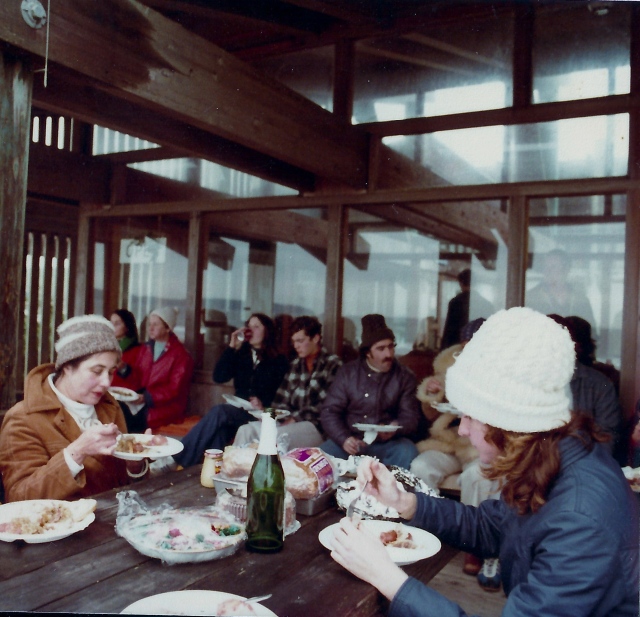 Since we’ve lived all over the world with our own children in a wide variety of climates, some of our German feasts have been consumed in record time while bundled up and braving icy weather, and others have been enjoyed in swimsuits at tropical temperatures.  With Hubby serving in the US Navy for 30 years, we always lived on a coast, which consistently made a January 1st beach outing possible. Here’s a part of our family at the 2013 New Year’s Day gathering complete with sauerkraut, on my favorite Portuguese beach, Adraga: 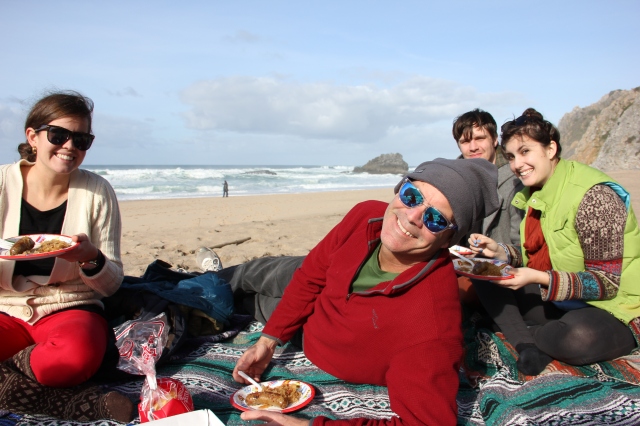 It’s a good thing our new home at Coppertop on the Olympic Peninsula is surrounded by water and beaches (and amazing mountains) — a perfect place.

The abundance of cabbages harvested this month in my garden means for the FIRST TIME EVER this New Year’s sauerkraut will be fully homemade! This is my first go at home fermentation. 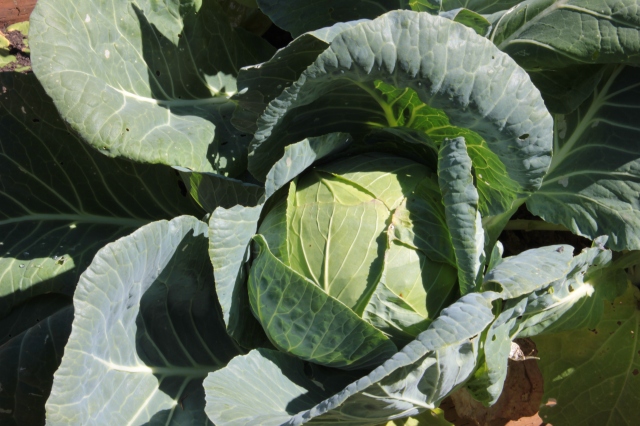 First step:  I was on a mission to find a large old stone crock in which to make sauerkraut. Last week I visited a new friend in Poulsbo, Washington, and we perused antique stores in the distinctively Scandinavian small town. While many crocks had cracks, chips and crazing and were unsuitable for anything other than display, I practically stumbled over this old pristine beauty, and so I brought it home. It cost less than half of what I would’ve spent at Williams-Sonoma or another kitchenwares store.  Win! 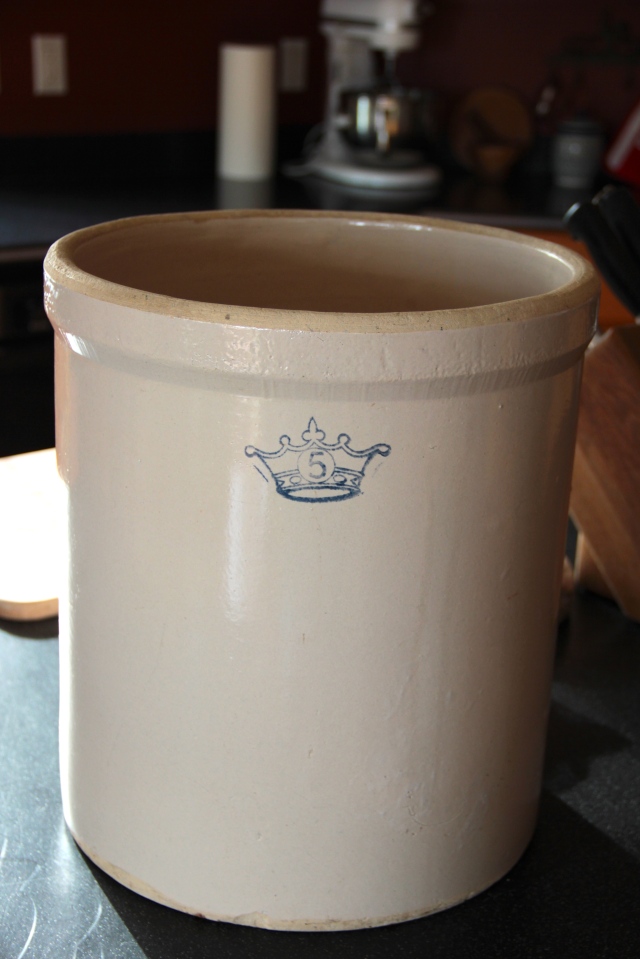 It’s hard to tell from the photo that this thing is mammoth — a 5 gallon capacity. It also weighs over 20 pounds empty.

One day this week I spent an hour shredding five enormous heads of cabbage, about 25 pounds of cabbage. I do own both a Cuisinart food processor and a mandoline, but I decided to get busy with my knife and cutting board instead. 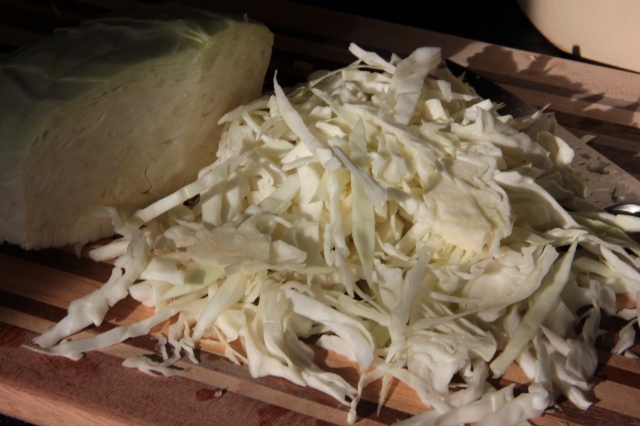 I followed some tried-and-true recipes for sauerkraut and simply layered cabbage and salt, pressing or tamping down the mixture. Within a half hour, I noticed the salt doing its work and the cabbage wilting nicely. Ah, the beginnings of fermentation! 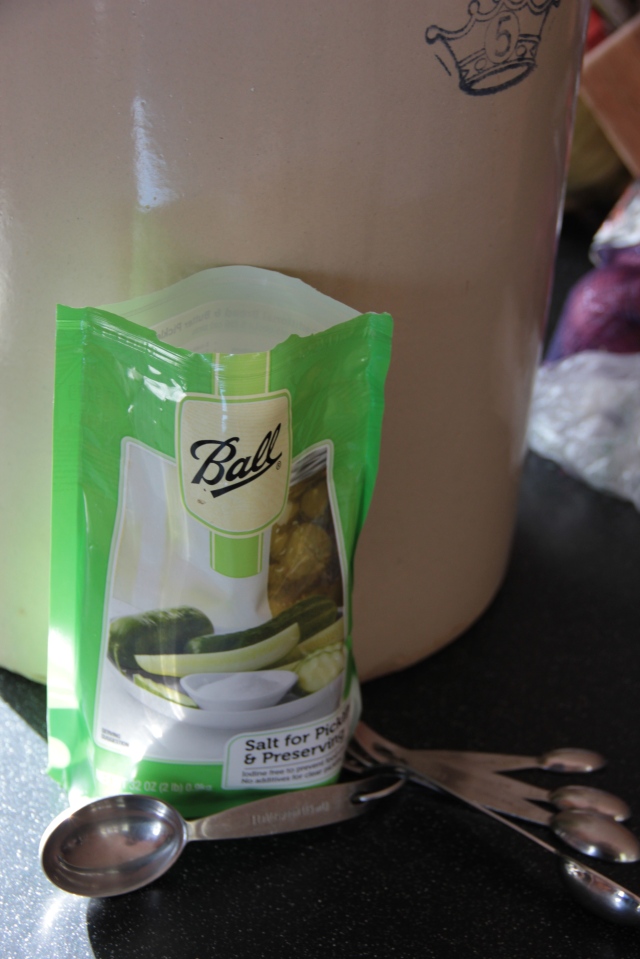 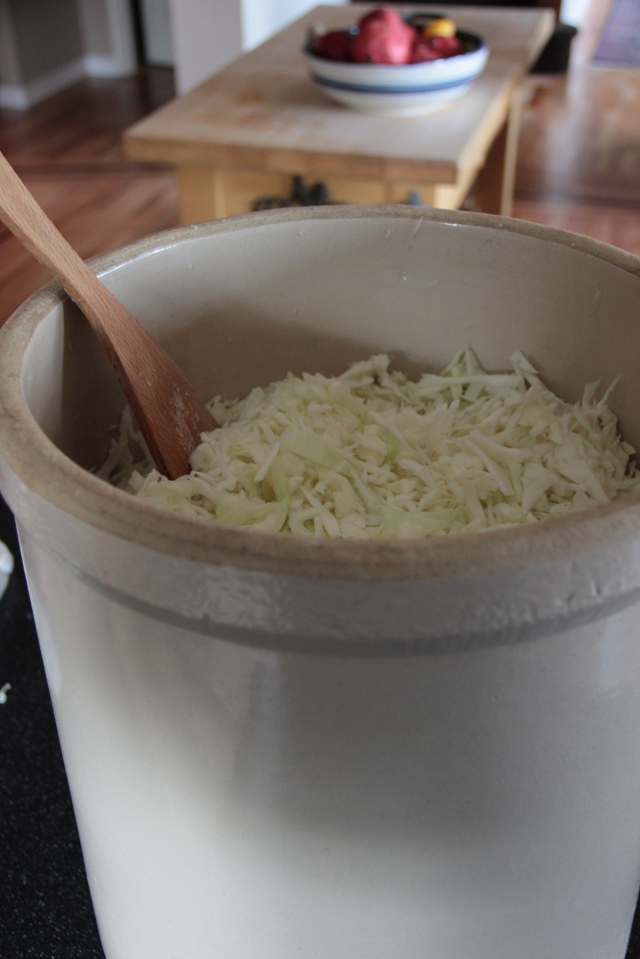 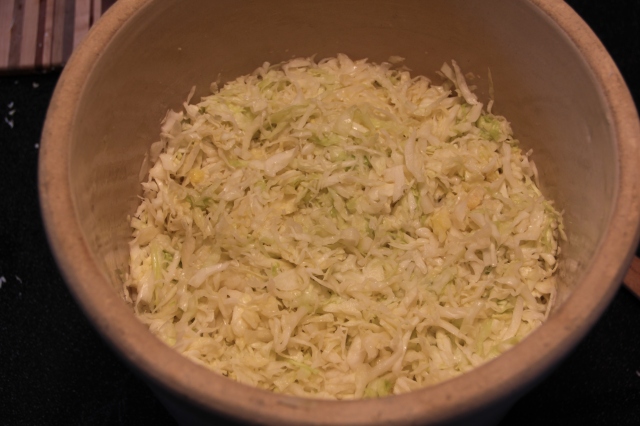 It’s essential to keep the cabbage fully submerged in brine, so I added a few extra cups of brine then topped the cabbage with a heavy pottery plate which I weighed down with a couple quart jars of water plus a gallon-size baggie of brine. (Brine fills the baggie instead of water just in case it springs a leak.) The shredded cabbage is doing its thing at least 2″ beneath the surface of the brine. 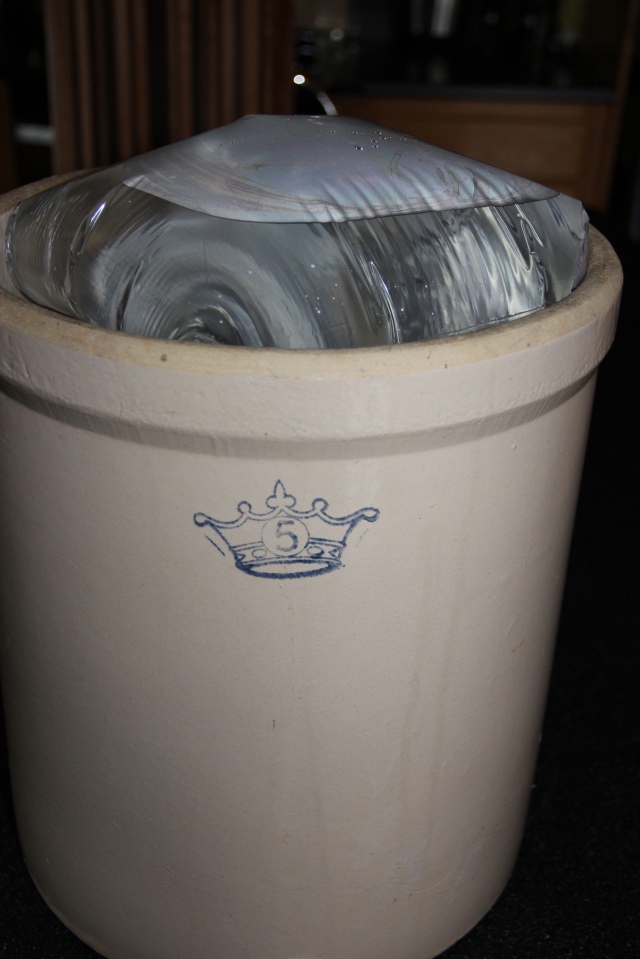 I covered it all with a heavy towel and tied the towel with a cord. Our breakfast room has become fermentation central. I’ve read that daily I’ll need to skim white film from the surface of the brine, and the entire fermentation process can take up to six weeks. I’ll know it’s ready when it ceases forming bubbles. Then it’ll be time to process the sauerkraut in jars in my canner — just in time to share some with family for New Year’s, I hope!