Plants I Could Live Without

“I am not one of those who in expressing opinions confine themselves to facts.”
― Mark Twain

In the past months, I’ve written about hundreds of gorgeous plants plus a few specific weeds here at Coppertop, mainly herb robert, dandelions, and deadnettle. Today I tackle other plants I’ve learned I wouldn’t mind living without.

Kniphofia uvaria is commonly known as red hot poker, torch lily or sometimes tritoma. I wish I were a fan, since we have two very large, very healthy clumps. They bloomed in June. I’m certain many folks adore this plant, but at Coppertop, we’re only leaving them in the ground because the hummingbirds love them.

Pampas grass or Cortaderia selloana has never been one of my or Hubby’s favorites. A neighbor in Virginia would have his pampas grass cut to ground each year, and his gardener always left plenty of swordlike remnants which blew into our perennial beds and would cut my fingers if I touched them without gloves. Razor-sharp leaves and allergy-causing plumes make a particularly displeasing combination. We are thankful for its shallow roots; Hubby dug out our large pampas grass in June so I don’t have a photo.

Urtica dioica is commonly known as stinging nettle or common nettle. Urtica comes from the Latin urere, “to burn,” which is why I  avoid these like the plague yet still have acutely painful run-ins with them.

These perennials thrive in the undeveloped parts of our land, and also near our compost heaps. These are painful and awful. I don’t care that they can be cooked and eaten or that they have nutritional and medicinal value; they’ve already caused me more pain than they’re worth. Ribbed, hollow stems quickly grow 2-4′ tall and are covered with stinging hairs, which, when touched, break off and become tiny hypodermic needles (really!) and release an acid which causes stinging pain. The below image was photographed by Liz Hirst, Head of the Electron Microscopy Unit at the National Institute for Medical Research in the U.K. 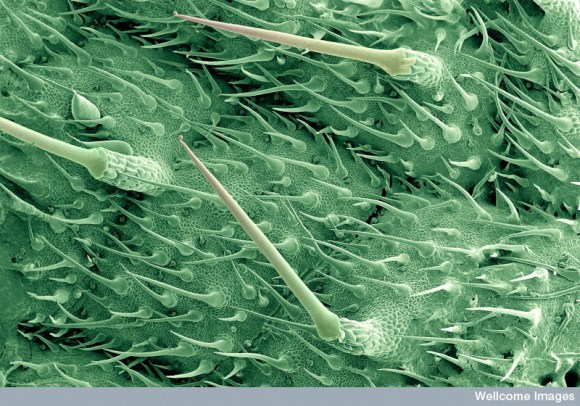 These flourished from June through August, and a few still remain in October. If I accidentally brush against one or grab an errant seedling while weeding without my thickest leather gloves, I feel the burn in my fingers for over 24 hours. Some people claim to be not as susceptible to the stings, including a tree cutter who helped out at Coppertop last month. Good for him! I almost didn’t make it through this 2009 article about a nettle-eating crazy man:   http://www.dailymail.co.uk/news/article-1194583/Gardener-world-stinging-nettle-eating-champion-attempt–Ouch.html.

And then there are the mums. They’re hugely popular at this time of year, but not with me as I wrote about here.

I consider all of these plants pretty much the opposite of peonies! To me they are mosquitos of the plant world.

2 thoughts on “Plants I Could Live Without”